I just saw a news report about the Boston Marathon bombing trial.
The theme of the piece was to validate the emotional trauma of the aid givers caused by the blast and the resulting injured and dead.
The scene was described like this: People were down. People were screaming. People were bleeding. People were in pain.
There was a helpless feeling among the care givers with no supplies.
Bystanders used clothing from nearby retail stores as tourniquets.
The news piece was convincing how such a horrific experience could cause such emotional trauma
to the victims and to the people who gave aid during such a traumatic event.

Imagine that same scenario times 1000.
Shit. No wonder I'm fucking crazy and resentful.
Don't make me jump through so many VA hoops to prove how fucking sick I am.
All you have to do is watch the evening news for God's sake. Wake up!
Posted by Ranger Dave at 8:19 PM

Your comments are welcomed.

These Poems in Print Format 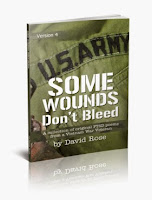 These poems are available in a book format. Click on the image to buy the book on Amazon.